The prostate is a gland located behind the base of the penis, about the size of a walnut, which manufactures seminal fluid, the liquid in semen. As we grow and age, the prostate continues to grow, and can develop problems that ultimately result in cancerous cells, which we call prostate cancer. Aside from skin cancer, prostate cancer is the most commonly occurring cancer amongst men. Around 250,000 men in the United States are diagnosed with this form of cancer every year, with around 60% of those being diagnosed in men over the age of 60. The recorded levels of prostate cancer have risen drastically since the 1980’s after the introduction of the PSA test and easy screening availability.

These tests mean that in most cases (89%), prostate cancer is diagnosed early, when the cancer is restricted to the prostate itself or the immediate surrounding tissue. This is known as the local or regional state, and when diagnosed at this point, patients have a close to 100% 5-year survival rate. However, despite this, at around 34,000 deaths a year, prostate cancer remains the second leading cause of cancer death in men within the United States.

With more than 3 million prostate cancer survivors living in the United States today, early diagnosis is key to overcoming this disease, and there are two important aspects to this. First is screening, the most commonly know is the PSA Blood Test, which provides an excellent way to identify potential cancer very early. The other is the Digital Rectal Exam, which your doctor will usually perform during a checkup.

This improved screening has dramatically increased the chances of early diagnosis, but men need to play their part too. There are several symptoms to be on the lookout for, including:

Of course, any of these symptoms could be something else, but if you do notice one or more, it is important to consult your doctor and perhaps tale a PSA test. It is especially important for men over 60 to be particularly vigilant in monitoring potential symptoms, as risk of prostate cancer increases significantly at this age.

For those diagnosed with prostate cancer, there are several treatment options depending on each patient’s existing health and whether the cancer remains local or has spread to other areas including the bones. With early diagnosis, patients have time to discuss all options with doctors and find the best solution to fit their needs. This can range from surgery to radiation therapy of focal therapies. There are several side-effects of these treatments which can be life-changing, so it is important to assess all options and understand the consequences when making choices.

With high levels of survivability, early diagnosis means that patients can overcome the disease and continue afterwards, but it is important men remain vigilant and discuss any issues with their doctor as soon as possible. 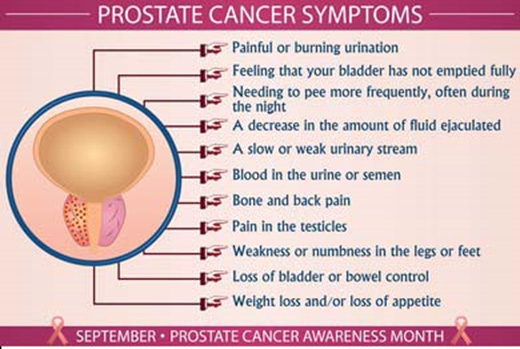